Unfortunately, P0533 (see here for previous posts) didn’t make it into C++20 either (originally targeted at C++ 17). It seems that there were just too many good papers and they couldn’t work through them all in the available time.

There’s lots of good stuff and clearly a strong and growing interest in constexpr’ing everything that can be constexpr’d, so I hold out hope for both it and P1383 in C++2.. uh… 2b? Or not 2b?

The C++ Kona meeting starts tomorrow or if you prefer on February the 18th, 2019, since you’re probably not reading this on the day I’m writing it. Apart from looking forward to C++20 in general, it matters to me because I’ve got two closely related papers under consideration.  TL;DR: 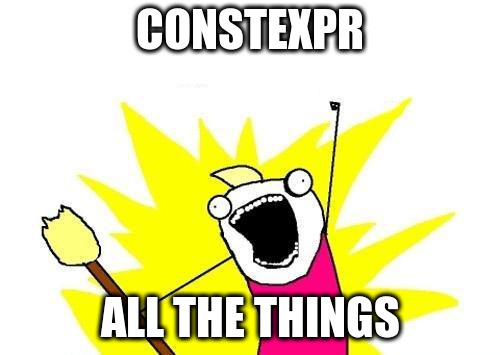 Except since they’re C++ committee papers, it’s actually more like:

Since the C++ committee doesn’t accept memes as proposals, what we actually submitted is:

If they get in then this post will finally be legal C++.

In an earlier post I wrote about using constexpr to generate compile time lookup tables. Unfortunately it turns out that that was dependent on a GCC extension. In actual C++14, pretty much nothing in <cmath> is constexpr.

My brother and I have written a proposal, currently P0533R0 to introduce a number of constexpr functions into <cmath>. Making functions constexpr is slightly tricky because some of them may set the global variable errno and/or floating point exception flags (effectively global variables),  and so it needs to be a language solution, not a pure library one. However, the basic arithmetic operators also fall into similar traps, so it’s not that bad.

The initial paper is to constexpr-ify all “simple” functions which don’t have pointer arguments. In this case, simple is defined as “closed over the extended rationals”, which includes the standard arithmetic operators, comparison operators and things like floor() and ceil(). It turns out there are actually rather a lot of these including many I’d never heard of before ploughing through <cmath>.

I think it should be straightforward to implement since GCC and LLVM both already do compile time evaluation of even non-simple functions (e.g. sqrt), the former actually making them constexpr as an extension of C++14, the latter only using them in the optimizer.