An Asus Zenbook UX21 that I sometimes maintain has has had one too many trips over the power chord and the power jack has become awfully flaky, so much so that it’s now broken to the point of being unusable. Doubly unfortunate is that the PSU died and the 3rd party one doesn’t have the light that tells you when it’s charging, and the battery is quite bad now so it’s easy for it to run out of power and then it’s really hard to tell if it’s charging or just sitting there.

On the whole, it’s been an excellent laptop but is beginning to feel its age, which makes me a lot less nervous about opening it up to see if it can easily be fixed. The only other non-abuse failing is that some of the screws fell out of the case. This seems a common complaint among Zenbook owners.

Due to the generally excellent build quality it was easy to get apart, just popping off the remaining case screws. the back came off easily:

The laptop is mostly battery!

The motherboard is really tiny and remarkably thin, so care is needed to not flex it. The SSD is upgradable which I didn’t realise and uses a proprietary connector for which adapters exist, fortunately. The heatsinking is decent with a rather dust-clogged fan on the end of a decent heatpipe.

Once inside, it came apart easily. On to the offending part, the power jack. Here it is:

see anything wrong? Weirdly it looks just fine. The last one I replaced on a laptop was smashed all to pieces. That’s good because it’s an oddball part and I’m gland I don’t need to find a replacement. Part of that is due to the barrel coming in through a relatively tight fitting hole in a relatively thick metal case, so there’s quite a lot of mechanical rigidity there.

see the bit at the top where the pin solders to the board? That joint is well dodgy! Turns out that the copper ring around the pin is really thin and once I melted the solder, it turned out that the pin isn’t even long enough, so the end is barely flush with the top of the board. Those two combine to make a really fragile connection.

The fix was easy, just adding some flux, removing the old solder and replacing it with new, quality (leaded) solder made it work perfectly.

So now it works again, and a replacement battery is on the way so it should have a good few years more left in it.

But especially given the overall build that was a remarkably poor job on a part often subject to high stresses.

I was a little surprised today when trying to debug a board when one of the output voltages was 4.8 V. The main reason for the surprise is that the power supply is specced at 3.3V. And I didn’t make the supply, Texas Instruments did. In fact it’s one of these.

Checking the manual reveals that TI do indeed claim that it’s supposed to output 3.3V. Time to find the regulator! There’s no continuity between USB power and the output so it’s not a short. Poking around on likely looking chips quickly reveals that the regulator is OUCH THAT SUCKER IS BOILING HOT! this one:

And has the markings in very small “PHUI”. I got a far as googling “PHUI v” before it autocompleted to “PHUI voltage regulator”, so I guessed I was on the right track :). Not very further down the track the TI TPS730 datasheet crops up showing it’s a TPS73033, which is a 3.3V LDO regulator rated to 200mA. And did I mention it’s baking? It seems to be fried in a rather unfortunate mode (and just for good measure, the NR pin which ought to be at 1.22V is at 0.14). Also, it turns out that the entire circuit diagram was in the manual, so there was no need for that bit of minor sleuthing.

So why good job TI? Well, the other, much more important chips, such as the micro controller I’m programming are rated to 3.9V absolute maximum and it didn’t die with 4.8V across it. I’m pretty pleased about that, because I can imagine going round a cycle frying many chips before finding out the power supply was defective. :shudder: :(.

Well anyway, it’s fried and I can’t use it. I mean technically I’ve successfully programmed the chip and not fried anything as far as I know, but there’s another as yet untested chip on the board rated to only 4.8V absolute maximum. I can’t trust it, so I can’t use it and so as far as I care it’s broken.

And that means I’m free! This guy has a great philosophy which is that if something is broken then there’s no risk of breaking it so you may as well try to fix it. Fortunately, I have some old boards which I’m not currently using which have ST Microelectronics L78L33 SO-8 voltage regulators on them. They’re not LDO so getting 3.3V from 5V is a bit dubious and actually is not quite within spec, but whatever, both my chip and the one in the programmer (a CC2511) work all the way down to 2V, so I reckon that is won’t matter. Also, it’s only rated for 100mA, not 200mA like the original, but both the chips are low power wireless ones so I doubt the current will go too high even when it’s programming. And besides that won’t be for long.

Time to dead bug it! And pot it in hot melt! 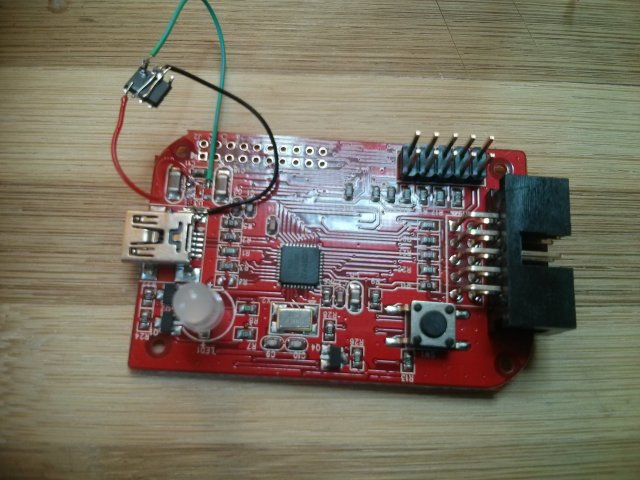 The LED perhaps to the surprise of no one is dimmer than before and the output voltage is 3.2V which is in fact well within spec for the 7833.